[TOTM: The following is part of a digital symposium by TOTM guests and authors on the law, economics, and policy of the antitrust lawsuits against Google. The entire series of posts is available here.]

As one of the few economic theorists in this symposium, I believe my comparative advantage is in that: economic theory. In this post, I want to remind people of the basic economic theories that we have at our disposal, “off the shelf,” to make sense of the U.S. Department of Justice’s lawsuit against Google. I do not mean this to be a proclamation of “what economics has to say about X,” but merely just to help us frame the issue.

In particular, I’m going to focus on the economic concerns of Google paying phone manufacturers (Apple, in particular) to be the default search engine installed on phones. While there is not a large literature on the economic effects of default contracts, there is a large literature on something that I will argue is similar: trade promotions, such as slotting contracts, where a manufacturer pays a retailer for shelf space. Despite all the bells and whistles of the Google case, I will argue that, from an economic point of view, the contracts that Google signed are just trade promotions. No more, no less. And trade promotions are well-established as part of a competitive process that ultimately helps consumers.

There are two reasons that Google paying Apple to be its default search engine is similar to a trade promotion. First, the deal brings awareness to the product, which nudges certain consumers/users to choose the product when they would not otherwise do so. Second, the deal does not prevent consumers from choosing the other product.

In the case of retail trade promotions, a promotional space given to Coca-Cola makes it marginally easier for consumers to pick Coke, and therefore some consumers will switch from Pepsi to Coke. But it does not reduce any consumer’s choice. The store will still have both items.

If we were to stop the analysis there, we could conclude that consumers are worse off (if just a tiny bit). Some customers will have to change the default app. We also need to remember that this contract is part of a more general competitive process. The retail stores are also competing with one another, as are smartphone manufacturers.

Despite popular claims to the contrary, Apple cannot charge anything it wants for its phone. It is competing with Samsung, etc. Therefore, Apple has to pass through some of Google’s payments to customers in order to compete with Samsung. Prices are lower because of this payment. As I phrased it elsewhere, Google is effectively subsidizing the iPhone. This cross-subsidization is a part of the competitive process that ultimately benefits consumers through lower prices.

These contracts lower consumer prices, even if we assume that Apple has market power. Those who recall your Econ 101 know that a monopolist chooses a quantity where the marginal revenue equals marginal cost. With a payment from Google, the marginal cost of producing a phone is lower, therefore Apple will increase the quantity and lower price. This is shown below: 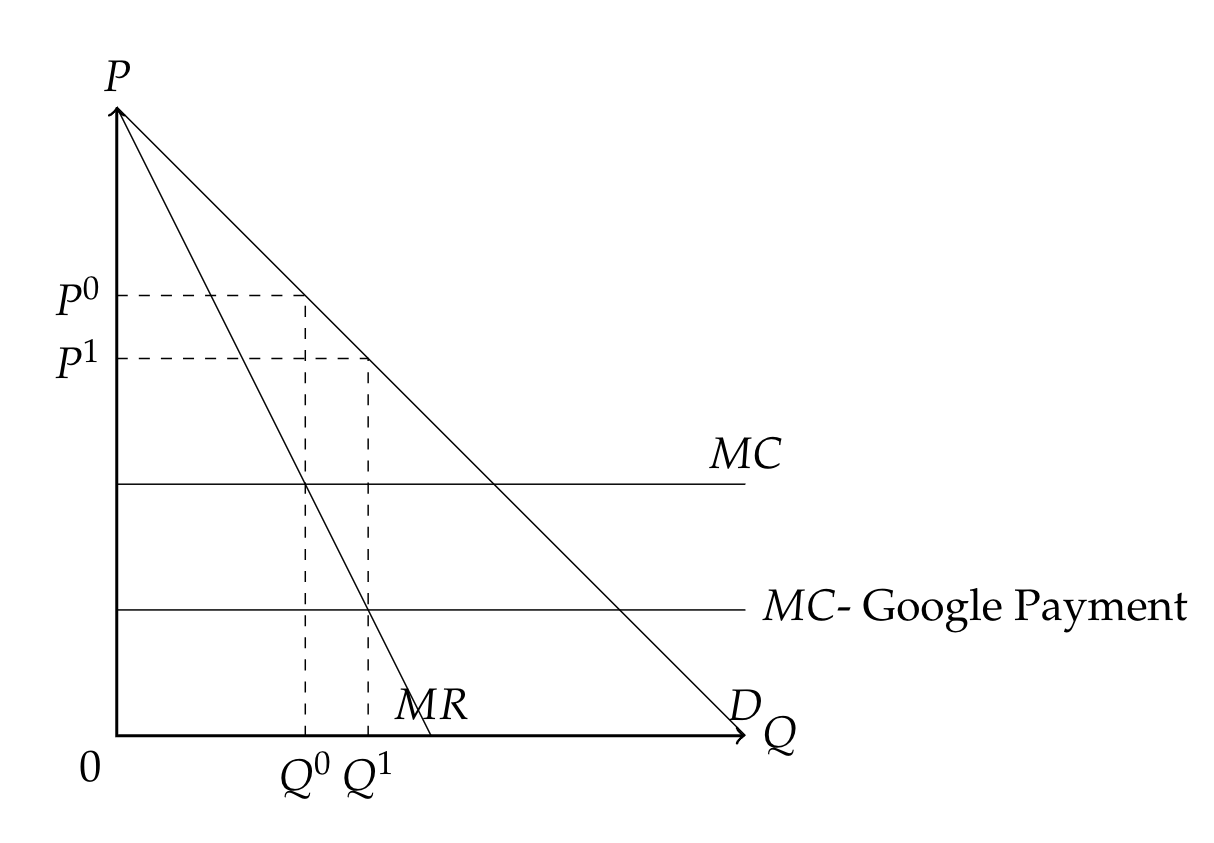 One of the surprising things about markets is that buyers’ and sellers’ incentives can be aligned, even though it seems like they must be adversarial. Companies can indirectly bargain for their consumers. Commenting on Standard Fashion Co. v. Magrane-Houston Co., where a retail store contracted to only carry Standard’s products, Robert Bork (1978, pp. 306–7) summarized this idea as follows:

The store’s decision, made entirely in its own interest, necessarily reflects the balance of competing considerations that determine consumer welfare. Put the matter another way. If no manufacturer used exclusive dealing contracts, and if a local retail monopolist decided unilaterally to carry only Standard’s patterns because the loss in product variety was more than made up in the cost saving, we would recognize that decision was in the consumer interest. We do not want a variety that costs more than it is worth … If Standard finds it worthwhile to purchase exclusivity … the reason is not the barring of entry, but some more sensible goal, such as obtaining the special selling effort of the outlet.

How trade promotions could harm customers

Since Bork’s writing, many theoretical papers have shown exceptions to Bork’s logic. There are times that the retailers’ incentives are not aligned with the customers. And we need to take those possibilities seriously.

The most common way to show the harm of these deals (or more commonly exclusivity deals) is to assume:

Consumers can be locked-in because there is some fixed cost of changing suppliers or because of some coordination problems. If that’s true, customers can be made worse off, on net, because the Google contracts reduce consumer choice.

To argue that Bing could not execute a similar contract, the most common appeal is that the new entrant does not have the capital to pay upfront for these contracts, since it will only make money from its higher-quality search engine down the road. That makes sense until you remember that we are talking about Microsoft. I’m skeptical that capital is the real constraint. It seems much more likely that Google just has a more popular search engine.

The other problem with coordination failure arguments is that they are almost non-falsifiable. There is no way to tell, in the model, whether Google is used because of a coordination failure or whether it is used because it is a better product. If Google is a better product, then the outcome is efficient. The two outcomes are “observationally equivalent.” Compare this to the standard theory of monopoly, where we can (in principle) establish an inefficiency if the price is greater than marginal cost. While it is difficult to measure marginal cost, it can be done.

There is a general economic idea in these models that we need to pay attention to. If Google takes an action that prevents Bing from reaching efficient size, that may be an externality, sometimes called a network effect, and so that action may hurt consumer welfare.

I’m not sure how seriously to take these network effects. If more searchers allow Bing to make a better product, then literally any action (competitive or not) by Google is an externality. Making a better product that takes away consumers from Bing lowers Bing’s quality. That is, strictly speaking, an externality. Surely, that is not worthy of antitrust scrutiny simply because we find an externality.

And Bing also “takes away” searchers from Google, thus lowering Google’s possible quality. With network effects, bigger is better and it may be efficient to have only one firm. Surely, that’s not an argument we want to put forward as a serious antitrust analysis.

Put more generally, it is not enough to scream “NETWORK EFFECT!” and then have the antitrust authority come in, lawsuits-a-blazing. Well, it shouldn’t be enough.

For me to take the network effect argument seriously from an economic point of view, compared to a legal perspective, I would need to see a real restriction on consumer choice, not just an externality. One needs to argue that:

That’s the challenge I would like to put forward to supporters of the lawsuit. I’m skeptical.