Building the Digital Future: Can the EU Foster a Dynamic and Crime-Free Internet? 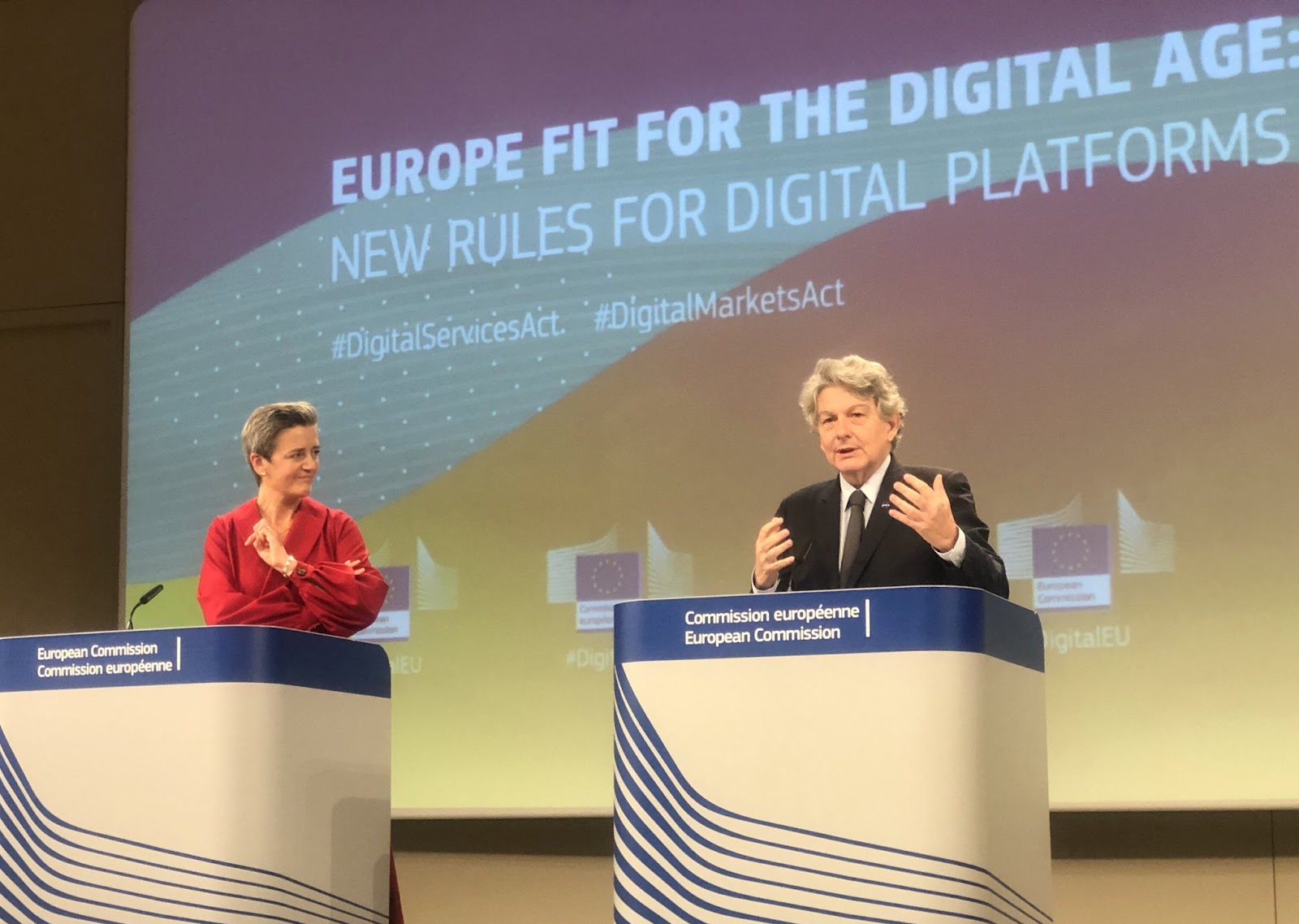 The European Commission has unveiled draft legislation (the Digital Services Act, or “DSA”) that would overhaul the rules governing the online lives of its citizens. The draft rules are something of a mixed bag. While online markets present important challenges for law enforcement, the DSA would significantly increase the cost of doing business in Europe and harm the very freedoms European lawmakers seek to protect. The draft’s newly proposed “Know Your Business Customer” (KYBC) obligations, however, will enable smoother operation of the liability regimes that currently apply to online intermediaries.

These reforms come amid a rash of headlines about election meddling, misinformation, terrorist propaganda, child pornography, and other illegal and abhorrent content spread on digital platforms. These developments have galvanized debate about online liability rules.

Existing rules, codified in the e-Commerce Directive, largely absolve “passive” intermediaries that “play a neutral, merely technical and passive role” from liability for content posted by their users so long as they remove it once notified. “Active” intermediaries have more legal exposure. This regime isn’t perfect, but it seems to have served the EU well in many ways.

With its draft regulation, the European Commission is effectively arguing that those rules fail to address the legal challenges posed by the emergence of digital platforms. As the EC’s press release puts it:

The landscape of digital services is significantly different today from 20 years ago, when the eCommerce Directive was adopted. […]  Online intermediaries […] can be used as a vehicle for disseminating illegal content, or selling illegal goods or services online. Some very large players have emerged as quasi-public spaces for information sharing and online trade. They have become systemic in nature and pose particular risks for users’ rights, information flows and public participation.

Online platforms initially hoped lawmakers would agree to some form of self-regulation, but those hopes were quickly dashed. Facebook released a white paper this Spring proposing a more moderate path that would expand regulatory oversight to “ensure companies are making decisions about online speech in a way that minimizes harm but also respects the fundamental right to free expression.” The proposed regime would not impose additional liability for harmful content posted by users, a position that Facebook and other internet platforms reiterated during congressional hearings in the United States.

European lawmakers were not moved by these arguments. EU Commissioner for Internal Market and Services Thierry Breton, among other European officials, dismissed Facebook’s proposal within hours of its publication, saying:

It’s not enough. It’s too slow, it’s too low in terms of responsibility and regulation.

Against this backdrop, the draft DSA includes many far-reaching measures: transparency requirements for recommender systems, content moderation decisions, and online advertising; mandated sharing of data with authorities and researchers; and numerous compliance measures that include internal audits and regular communication with authorities. Moreover, the largest online platforms—so-called “gatekeepers”—will have to comply with a separate regulation that gives European authorities new tools to “protect competition” in digital markets (the Digital Markets Act, or “DMA”). 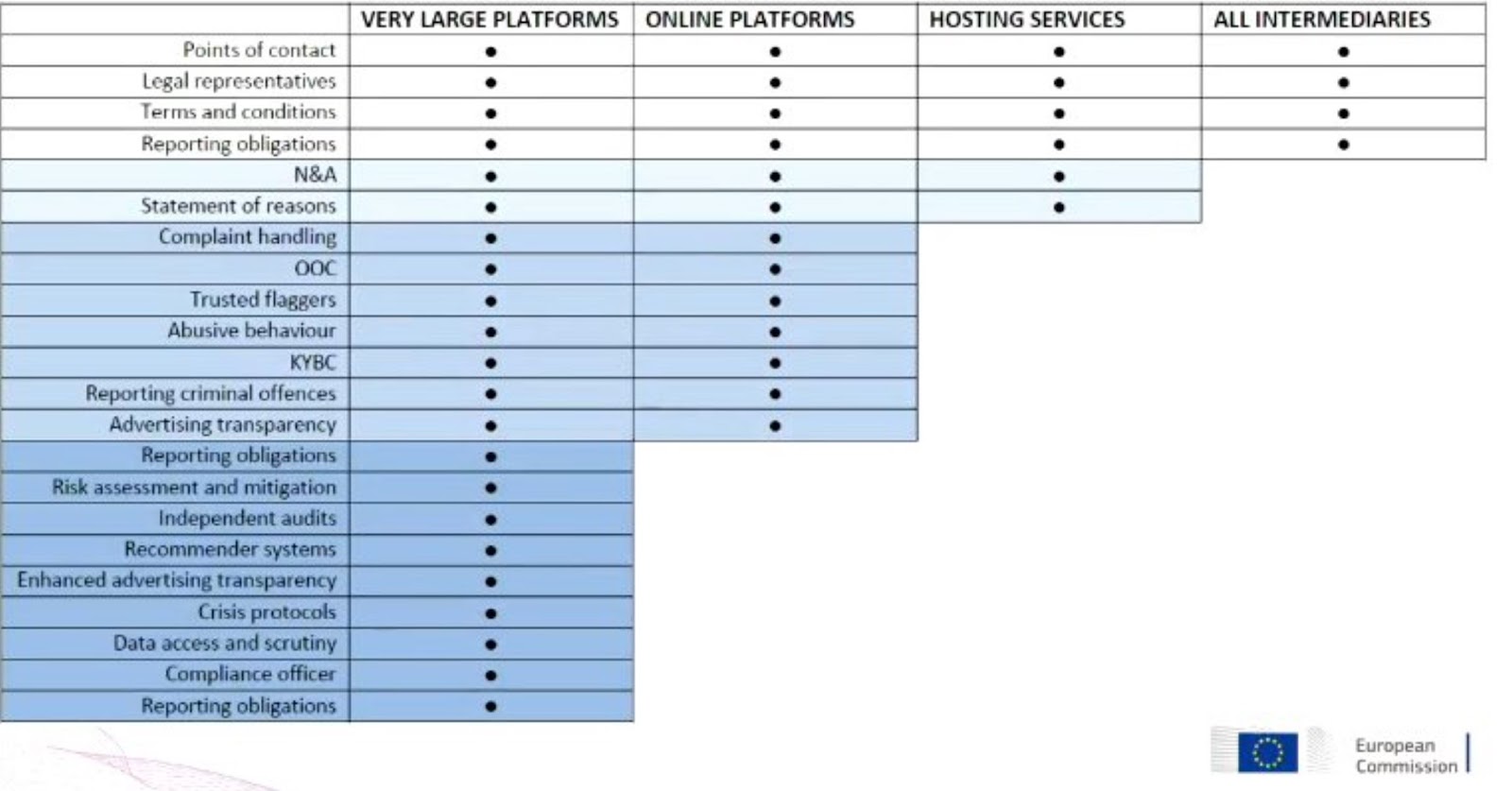 The upshot is that, if passed into law, the draft rules will place tremendous burdens upon online intermediaries. This would be self-defeating.

Excessive regulation or liability would significantly increase their cost of doing business, leading to significantly smaller networks and significantly increased barriers to access for many users. Stronger liability rules would also encourage platforms to play it safe, such as by quickly de-platforming and refusing access to anyone who plausibly engaged in illegal activity. Such an outcome would harm the very freedoms European lawmakers seek to protect.

This could prove particularly troublesome for small businesses that find it harder to compete against large platforms due to rising compliance costs. In effect, the new rules will increase barriers to entry, as has already been seen with the GDPR.

In the commission’s defense, some of the proposed reforms are more appealing. This is notably the case with the KYBC requirements, as well as the decision to leave most enforcement to member states, where services providers have their main establishments. The latter is likely to preserve regulatory competition among EU members to attract large tech firms, potentially limiting regulatory overreach.

Indeed, while the existing regime does, to some extent, curb the spread of online crime, it does little for the victims of cybercrime, who ultimately pay the price. Removing illegal content doesn’t prevent it from reappearing in the future, sometimes on the same platform. Importantly, hosts have no obligation to provide the identity of violators to authorities, or even to know their identity in the first place. The result is an endless game of “whack-a-mole”: illegal content is taken down, but immediately reappears elsewhere. This status quo enables malicious users to upload illegal content, such as that which recently led card networks to cut all ties with Pornhub.

Victims arguably need additional tools. This is what the Commission seeks to achieve with the DSA’s “traceability of traders” requirement, a form of KYBC:

Under the proposed rules, intermediaries would be required to obtain the true identity of commercial clients (as opposed to consumers) and to sever ties with businesses that refuse to comply (rather than just take down their content). Such obligations would be, in effect, a version of the “Know Your Customer” regulations that exist in other industries. Banks, for example, are required to conduct due diligence to ensure scofflaws can’t use legitimate financial services to further criminal enterprises. It seems reasonable to expect analogous due diligence from the Internet firms that power so much of today’s online economy.

Obligations requiring platforms to vet their commercial relationships may seem modest, but they’re likely to enable more effective law enforcement against the actual perpetrators of online harms without diminishing platform’s innovation and the economic opportunity they provide (and that everyone agrees is worth preserving).

There is no silver bullet. Illegal activity will never disappear entirely from the online world, just as it has declined, but not vanished, from other walks of life. But small regulatory changes that offer marginal improvements can have a substantial effect. Modest informational requirements would weed out the most blatant crimes without overly burdening online intermediaries. In short, it would make the Internet a safer place for European citizens.