The Finnish consultancy Rewheel periodically issues reports using mobile wireless pricing information to make claims about which countries’ markets are competitive and which are not. For example, Rewheel claims Canada and Greece have the “least competitive monthly prices” while the United Kingdom and Finland have the most competitive.

Rewheel often claims that the number of carriers operating in a country is the key determinant of wireless pricing.

Their pricing studies attract a great deal of attention. For example, in February 2019 testimony before the U.S. House Energy and Commerce Committee, Phillip Berenbroick of Public Knowledge asserted: “Rewheel found that consumers in markets with three facilities-based providers paid twice as much per gigabyte as consumers in four firm markets.” So, what’s wrong with Rewheel? An earlier post highlights some of the flaws in Rewheel’s methodology. But there’s more.

Rewheel creates fictional market baskets of mobile plans for each provider in a county. Country-by-country comparisons are made by evaluating the lowest-priced basket for each country and the basket with the median price.

Rewheel’s market baskets are hypothetical packages that say nothing about which plans are actually chosen by consumers or what the actual prices paid by those consumers were. This is not a new criticism. In 2014, Pauline Affeldt and Rainer Nitsche called these measures “meaningless”:

Such approaches are taken by Rewheel (2013) and also the Austrian regulator rtr … Such studies face the following problems: They may pick tariffs that are relatively meaningless in the country. They will have to assume one or more consumption baskets (voice minutes, data volume etc.) in order to compare tariffs. This may drive results. Apart from these difficulties such comparisons require very careful tracking of tariffs and their changes. Even if one assumes studying a sample of tariffs is potentially meaningful, a comparison across countries (or over time) would still require taking into account key differences across countries (or over time) like differences in demand, costs, network quality etc.

For example, reporting that the average price of a certain T-Mobile USA smartphone, tablet and home Internet plan is $125 is about as useless as knowing that the average price of a Kroger shopping cart containing a six-pack of Budweiser, a dozen eggs, and a pound of oranges is $10. Is Safeway less “competitive” if the price of the same cart of goods is $12? What could you say about pricing at a store that doesn’t sell Budweiser (e.g., Trader Joe’s)?

Rewheel solves that last problem by doing something bonkers. If a carrier doesn’t offer a plan in one of Rewheel’s baskets, they “assign” the HIGHEST monthly price in the world.

For example, Rewheel notes that Vodafone India does not offer a fixed wireless broadband plan with at least 1,000GB of data and download speeds of 100 Mbps or faster. So, Rewheel “assigns” Vodafone India the highest price in its dataset. That price belongs to a plan that’s sold in the United Kingdom. It simply makes no sense.

To return to the supermarket analogy, it would be akin to saying that, if a Trader Joe’s in the United States doesn’t sell six-packs of Budweiser, we should assume the price of Budweiser at Trader Joe’s is equal to the world’s most expensive six-pack of the beer. In reality, Trader Joe’s is known for having relatively low prices. But using the Rewheel approach, the store would be assessed to have some of the highest prices.

Because of Rewheel’s “assignment” of highest monthly prices to many plans, it’s irrelevant whether their analysis is based on a country’s median price or lowest price. The median is skewed and the lowest actual may be missing from the dataset.

Rewheel publishes these reports to support its argument that mobile prices are lower in markets with four carriers than in those with three carriers. But even if we accept Rewheel’s price data as reliable, which it isn’t, their own data show no relationship between the number of carriers and average price. 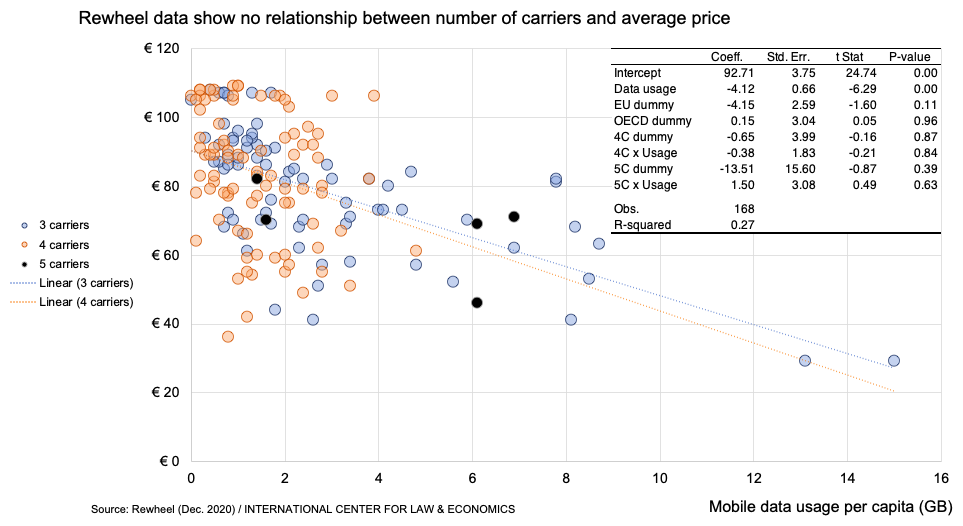 Notice the huge overlap of observations among markets with three and four carriers.

Rewheel’s latest report provides a redacted dataset, reporting only data usage and weighted average price for each provider. So, we have to work with what we have.

A simple regression analysis shows there is no statistically significant difference in the intercept or the slopes for markets with three, four or five carriers (the default is three carriers in the regression). Based on the data Rewheel provides to the public, the number of carriers in a country has no relationship to wireless prices.

Rewheel seems to have a rich dataset of pricing information that could be useful to inform policy. It’s a shame that their topline summaries seem designed to support a predetermined conclusion.

Will the merger between T-Mobile and Sprint make consumers better or worse off? A central question in the review of this merger—as it is in all merger reviews—is the likely effects that the transaction will have on consumers. In this post, we look at one study that opponents of the merger have been using to support their claim that the merger will harm consumers.

Along with my earlier posts on data problems and public policy (1, 2, 3, 4, 5), this provides an opportunity to explore why seemingly compelling studies can be used to muddy the discussion and fool observers into seeing something that isn’t there.

This merger—between the third and fourth largest mobile wireless providers in the United States—has been characterized as a “4-to-3” merger, on the grounds that it will reduce the number of large, ostensibly national carriers from four to three. This, in turn, has led to concerns that further concentration in the wireless telecommunications industry will harm consumers. Specifically, some opponents of the merger claim that “it’s going to be hard for someone to make a persuasive case that reducing four firms to three is actually going to improve competition for the benefit of American consumers.”

A number of previous mergers around the world can or have also been characterized as 4-to-3 mergers in the wireless telecommunications industry. Several econometric studies have attempted to evaluate the welfare effects of 4-to-3 mergers in other countries, as well as the effects of market concentration in the wireless industry more generally. These studies have been used by both proponents and opponents of the proposed merger of T-Mobile and Sprint to support their respective contentions that the merger will benefit or harm consumer welfare.

One particular study has risen to prominence among opponents of 4-to-3 mergers in telecom in general and the T-Mobile/Sprint merger in specific. This is worrying because the study has several fundamental flaws.

This study, by Finnish consultancy Rewheel, has been cited by, among others, Phillip Berenbroick of Public Knowledge, who in Senate testimony, asserted that “Rewheel found that consumers in markets with three facilities-based providers paid twice as much per gigabyte as consumers in four firm markets.”

The Rewheel report upon which Mr. Berenbroick relied, is, however, marred by a number of significant flaws, which undermine its usefulness.

Rewheel’s report purports to analyze the state of 4G pricing across 41 countries that are either members of the EU or the OECD or both. The report’s conclusions are based mainly on two measures:

Rewheel’s use of the country median across all plans is problematic. In particular it gives all plans equal weight, regardless of consumers’ use of each plan. For example, a plan targeted for a consumer with a “high” level of usage is included with a plan targeted for a consumer with a “low” level of usage. Even though a “high” user would not purchase a “low” plan (which would be relatively expensive for a “high” user), all plans are included, thereby skewing upward the median estimates.

But even if that approach made sense as a way of measuring consumers’ willingness to pay, in execution Rewheel’s analysis contains the following key defects:

Such approaches are taken by Rewheel (2013) and also the Austrian regulator rtr (when tracking prices over time, see rtr (2014)). Such studies face the following problems: They may pick tariffs that are relatively meaningless in the country. They will have to assume one or more consumption baskets (voice minutes, data volume etc.) in order to compare tariffs. This may drive results. Apart from these difficulties such comparisons require very careful tracking of tariffs and their changes. Even if one assumes studying a sample of tariffs is potentially meaningful, a comparison across countries (or over time) would still require taking into account key differences across countries (or over time) like differences in demand, costs, network quality etc.

I took the information from the columns for hypothetical monthly prices of €30 a month and €50 a month, and converted data into a price per gigabyte to generate the dependent variable. Following Rewheel’s assumption, “unlimited” is converted to 250 gigabytes per month. Greece was dropped from the analysis because Rewheel indicates that no data is available at either hypothetical price level.

The tables below confirm what an eyeballing of the figure suggest: Rewheel’s data show number of MNOs in a country have no statistically significant relationship with price per gigabyte, at either the €30 a month level or the €50 a month level.

While the signs on the MNO coefficient are negative (i.e., more carriers in a country is associated with lower prices), they are not statistically significantly different from zero at any of the traditional levels of statistical significance.

Also, the regressions suffer from relatively low measures of goodness-of-fit. The independent variables in the regression explain approximately five percent of the variation in the price per gigabyte. This is likely because of the cockamamie way Rewheel measures price, but is also due to the known problems with performing cross-sectional analysis of wireless pricing, as noted by Csorba & Pápai (2015):

Many regulatory policies are based on a comparison of prices between European countries, but these simple cross-sectional analyses can lead to misleading conclusions because of at least two reasons. First, the price difference between countries of n and (n + 1) active mobile operators can be due to other factors, and the analyst can never be sure of having solved the omitted variable bias problem. Second and more importantly, the effect of an additional operator estimated from a cross-sectional comparison cannot be equated with the effect of an actual entry that might have a long-lasting effect on a single market.

The Rewheel report cannot be relied upon in assessing consumer benefits or harm associated with the T-Mobile/Sprint merger, or any other merger

Rewheel apparently has a rich dataset of wireless pricing plans. Nevertheless, the analyses presented in its report are fundamentally flawed. Moreover, Rewheel’s conclusions regarding three vs. four carrier countries are not only baseless, but clearly unsupported by closer inspection of the information presented in its report. The Rewheel report cannot be relied upon to inform regulatory oversight of the T-Mobile/Spring merger or any other. This study isn’t unique and it should serve as a caution to be wary of studies that merely eyeball information.